More than 80% of the global urban population is exposed to air that does not meet the quality standards provided by the World Health Organization (WHO). In developing countries, air pollution levels exceed WHO limits in 98% of cities. As a result, air pollution causes an estimated 5.5 million premature deaths worldwide—more than malnutrition, obesity, and alcohol and drug abuse [1].

Carbon emission is by far the leader of all greenhouse gas emissions, and transportation is among the highest contributors to carbon emissions. Two dangerous constituents of vehicle exhaust fumes are carbon monoxide (CO) and nitrogen oxides (NOx). Pakistan contains 3 of the 20 most polluted cities in the world and has been listed by the World Bank as suffering from the most profound air pollution in South Asia [2]. However, for Pakistan and many other developing countries, vehicle emission regulations are either not present, or not properly implemented or enforced.

Lack of regulation enforcement in low-income countries is partly due to the absence of expensive, non portable instruments required to detect vehicle exhaust emissions. These include Non-Dispersive Infrared (NDIR) and Gas Chromatography (GC) for CO, and Gas Phase Chemiluminescence for NOx detection. Therefore, what many of these communities need is a method that is portable, easy-to-use, and inexpensive, thus making it accessible to local government agencies. 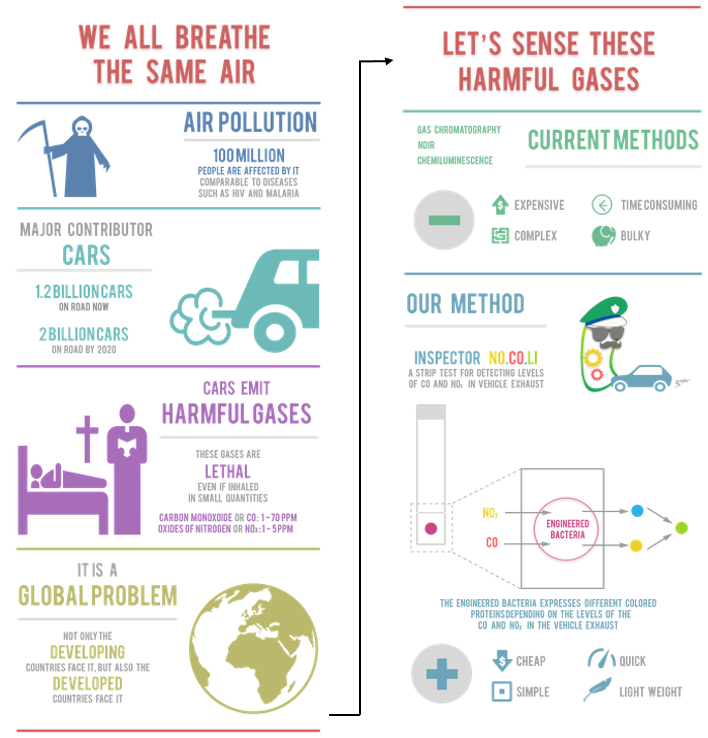 With the goal of developing a biological device that could cheaply measure vehicle pollutants, 12 undergraduates from across Pakistan gathered in Peshawar during the summer of 2016 to form Pakistan’s first iGEM team, Team Peshawar. The group envisioned a bacterial biosensor that could detect CO and NOx levels in vehicle exhaust and provide colorimetric readouts through chromoprotein expression.

After successful modeling and simulation of their concept, they genetically engineered E. coli cells to incorporate both the CO- and NOx-detecting circuits. In the presence of external CO, the CO-sensing circuit is activated and produces a blue color. This occurs when 2 molecules of CO bind the CooA transcription factor to form a CO–CooA complex, which activates the pCooF promoter and results in transcription of a gene that expresses blue chromoprotein.

Likewise, external NOx activates the NOx-detecting circuit. Molecules of NOx attach to the NsrR repressor, activating the pYeaR and pNirK promoters (p). The promoters in turn transcribe a gene expressing a yellow chromoprotein. When both CO and NOx gases are present, the cells express both blue and yellow chromoproteins, producing a shade of green (Figure 2).

Figure 2. Design of an E. coli “biosensor” that expresses chromoproteins in the presence of CO and NOx gases. This model of the 2016 iGEM Team Peshawar engineered E. coli cell depicts the CO- and NOx-detecting constructs. The presence of CO activates the CooA transcription factor, which triggers activity of the CooF promoter, pCooF, resulting in expression of a blue chromoprotein. Likewise, the presence of NOx inactivates the NsrR repressor, releasing the promoters, pYeaR and pNirk, to express a yellow chromoprotein. When both gases are present, the cell will express both blue and yellow chromoproteins, resulting in a green color. (Figure courtesy of 2016 iGEM Team Peshawar.)

"Given the rarity of synthetic biology research in Pakistan, we were probably the first to use gBlocks Gene Fragment synthesis,” shared Team Leader, Muhammad Ali. “Continued correspondence with IDT personnel provided valuable guidance—from the ordering procedure to cloning protocols—which really helped us execute our project. The gBlocks Gene Fragments arrived in only a few days, a pleasing result in a country where primers usually take weeks to months to reach us. We are proud to have initiated the synthetic biology legacy in Pakistan through our iGEM project, and we have IDT to credit for making it possible.”

Team Peshawar envisions their final product as a test strip that can be used in real world settings to detect CO and NOx levels in vehicle exhaust fumes. The strip would contain a box with 2 sections: one with the engineered bacteria in nutrient media, and one with bactericides that would act as a “kill switch” to destroy the engineered cells. The strip could be used several times until the media is depleted.

While the E. coli strain used in this project is non-pathogenic and genetically modified such that it cannot colonize the mammalian gut, the kill switch provides control over horizontal gene transfer. The twister, when turned, would break the wall in between the sections, degrading the engineered bacteria (Figure 4). “In its final format, the team sees expanded uses of the test strip”, revealed Muhammed Ali. “It could be used not only for vehicle exhaust fume detection, but also for sensing CO leakages in indoor equipment, which can be fatal.”

The first Pakistani iGEM team included 4 women and 8 men from universities across the country, who spent an intensive 4 months developing and executing their prize-winning project (Figure 5). Team Peshawar was sponsored by the Directorate of Science and Technology, Khyber-Pakhtunkhwa, and was supported by the Institute of Integrative Biosciences at CECOS University. "We have been waiting for this moment to introduce synthetic biology in Pakistan, and what better way than to give students the opportunity to do cutting edge biotechnology research," said Dr Faisal Khan, Principal Investigator and Team Supervisor, who is also the director of the Institute of Integrative Biosciences at CECOS.

In November 2016, the Pakastani undergraduate students competed with 300 teams in the 2016 iGEM International Jamboree competition, which included teams from top education institutions such as Harvard and Oxford. Their project won a bronze medal.

For years, IDT has supported iGEM participants in their efforts to create solutions to all kinds environmental, medical, and technical problems. Support comes in the form of custom, high quality, double-stranded DNA fragments—gBlocks Gene Fragments. In 2016, over 250 teams took advantage of our offer to receive up to 20 kb of gBlocks Gene Fragments for free. Find out more at www.idtdna.com/iGEM.

The iGEM (International Genetically Engineered Machine) competition is a science project tournament where undergraduate students form cross-disciplinary teams and compete for a variety of awards. In constructing their projects, students learn invaluable lessons about fundraising, public awareness, and ethical conduct. The event started in 2001 as a summer course at MIT and has expanded over the past 15 years to include 300 teams from universities around the world. IDT regularly donates custom DNA fragments to iGEM teams, facilitating easy construction or modification of new and existing genes for a desired function. These gene fragments can also be used to generate control sequences, enzyme substrates, or anything else that requires double-stranded DNA. In 2016, IDT provided 20 kb of free gBlocks Gene Fragments to each of the 250 participating iGEM teams who requested them. Read a summary of our interview with iGEM president, Randy Rettberg, to learn more.

Special thanks to Fatima Asad, Manager of Customer Relationship and Events, IDT

Ordering your cloned sequences as synthetic gene products and save valuable time and resources.

Sequence-verified for use in CRISPR applications (HDR) and in vitro transcription.

Gene fragments from 200 to 3000 bp shipped plated, or in suspension and ready for use.