Biomarkers, indicators of a disease or outcome, are used to diagnosis patients, determine prognosis, develop a targeted therapy, and monitor treatment response. Biomarkers have helped increase survival rate for many types of cancer, including breast cancer and colorectal cancer. Since there are so many kinds of biomarkers, there are many paths to their discovery. Screening biomarkers for your chosen outcome ensures that they are relevant and effective. 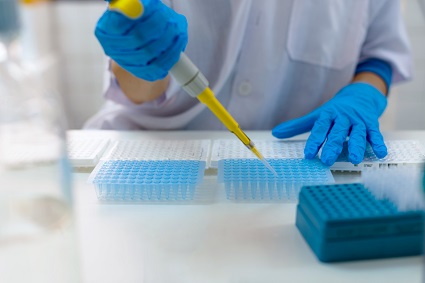 What is a biomarker?

A biomarker is a biological indicator of a disease or outcome. It can be a gene, protein, hormone, or any measurable substance. These indicators might be involved in the mechanism of disease pathogenesis, or they might be a byproduct of organism dysfunction.

The search for appropriate biomarkers starts with profiling. Profiling a sample provides data about cell populations, genes, and proteins, and can be performed by a variety of methods (Table 1). Genomic (DNA), epigenomic (RNA), and proteomic (protein) profiling have all yielded important biomarker discoveries. For example, investigation of methylation patterns can reveal methylated DNA as an epigenetic biomarker. Methylation sequencing (Methyl-Seq) is a next generation sequencing (NGS) technique that identifies methylation patterns for early detection of several cancer types, such as colorectal cancer and esophageal adenocarcinoma [1].

Biomarker screening can be performed during molecular profiling, as is usually the case with fluorescence-activated cell sorting (FACS), or screening can be a separate step. Screening involves either analyzing the data gleaned from molecular profiling to prioritize candidate biomarkers or using an additional method to further characterize the biomarkers.

After candidate biomarkers are identified, they should be validated with an alternate method. Validation requires that biomarkers are linked to human health endpoints. This process is called “fit-for-purpose” [2]. The extent to which a biomarker is validated depends on the application. Validation requires information on sensitivity and specificity of the biomarker. Often, a technique that is used for screening can also be used for validation. Candidate genes found through NGS are often validated through qPCR. The information implied by the presence of the biomarker must be accurate and precise.  Researchers and clinicians ensure that biomarkers are reliable and applicable to the tested demographic.

Screening biomarkers is the first step toward developing drug targets. Patients should be given specific, effective treatments for their disease type. Implementing the use of biomarkers in the clinical space requires quality control testing of methods in a variety of different settings. Biomarkers must perform the same way in any situation. Like to the validation step, the stringency and parameters of the implementation step depend on the intended use of the biomarker.

Sensitivity and specificity of biomarkers play a key role in targeted therapies. One sensitive biomarker is called minimal residual disease (MRD). MRD is when a small number of cancer cells remains in the patient’s blood during or after treatment. MRD can lead to cancer relapse. Liquid biopsy, or blood screening, paired with NGS can detect minute numbers of cancer cells and determine whether the treatment has completely eradicated the cancer. Presence or absence of MDR detected by liquid biopsy testing can also be used to track the efficacy of treatment and adjust the therapy the patient is receiving.

One specific cancer type that has benefited from biomarker discovery is breast cancer. Breast cancer affects over 300,000 women each year and is the second most common cause of death from cancer for women (www.cancer.net/cancer-types/breast-cancer/statistics). The disease also can affect men, albeit at a much lower incidence. Although mammography is routinely used to screen for cancerous lesions, some families harbor genetic mutations in the BRCA (BReast CAncer gene) genes. Every person’s genome contains the BRCA1 and BRCA2 genes, which produce proteins that repair damaged DNA. Mutations in one or both genes increase the risk of developing breast or ovarian cancer due to the loss of the repair pathway.

Several molecular diagnostic tests are available to look for mutations in BRCA1 and BRCA2, as well as, in an increasing number of genes that have been identified as potentially harboring driver mutations for other cancers. Although these tests were traditionally done with PCR-based analysis, the decreasing cost of NGS has increased its use as a diagnostic tool. In addition to the decreased cost, NGS results clearly define the type and scope of the genetic mutation(s) in a wide panel of genes. With over 70,000 scientific articles published since 2018 with the term “cancer biomarker” according to Google Scholar, new and different biomarkers are being discovered at an incredible pace. It is important for any NGS-based diagnostic panel to be modular, allowing for additions and subtractions of various genetic mutations as research dictates.

Hand-picked information on targeted sequencing in biomarker development and validation in cancer research.

Gene expression is the conversion of heritable, genetic information into RNA or protein. Any differences or changes in gene expression are important measures for understanding biological systems, including normal development and disease progression.

xGen Lockdown Panels are stocked enrichment panels for targeted next generation sequencing. The panels consist of individually synthesized and quality-controlled xGen Lockdown Probes that have been validated to provide the highest level of performance.

gBlocks and gBlocks HiFi Gene Fragments are dsDNA fragments of 125⁠–⁠3000 bp in length. They are designed for affordable and easy gene construction or modification, qPCR/NGS controls, and more.