Read this advice from our own thermodynamics specialist, Dr Richard Owczarzy, on the effects of melting temperature (Tm) on hybridization. He provides considerations for better oligo and PCR/qPCR assay design, including oligo concentration, salt, and base pairing mismatch positioning.

Hybridization is a common step of many, if not most, molecular biology protocols. Examples of techniques that include nucleic acid hybridization are northern and Southern analysis, PCR/qPCR, cloning, in situ hybridization, array analysis, gene knockdown, and next generation sequencing (NGS).

The criteria for hybridization are based on nucleic acid strand melting. Therefore, an understanding of melting temperature (Tm) provides information on when and how the DNA or RNA strands are going to hybridize and defines the rules for hybridization. It is very important to understand this process so that you can better design and optimize the oligos for your experiments.

Dr Richard Owczarzy (Ohv-char’-zee), a senior researcher at IDT and an extensively published expert on nucleic acid thermodynamics, confirms that many researchers are still under the illusion that they can use a simple formula to calculate Tm—multiplying the number of GC and AT bases by a given constant. “But this is not how Tm works,” says Dr Owczarzy. “Tm is not a constant value, but is dependent on the conditions of the experiment. Additional factors must be considered, such as oligo concentration and the environment in which hybridization will take place.” Important factors that affect Tmare discussed in the following sections. 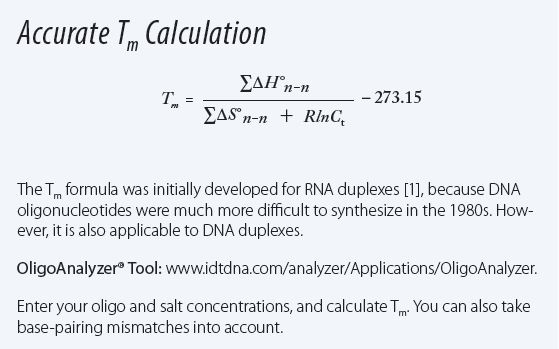 The concentrations of monovalent (sodium, potassium), divalent (magnesium), and polyvalent cations affect the stability of hybridized oligonucleotides. Divalent cations have the biggest impact on Tm—changes in the millimolar range are significant. Increasing the concentration of monovalent cations, such as Na+, up to 1–2 M stabilizes oligos. However, these higher concentrations can significantly impact Tm. “A change from 20–30 mM Na+ to 1 M Na+ can cause oligonucleotide Tm to vary by as much as 20°C,” notes Dr Owczarzy. “We have worked through the calculations for sodium and magnesium ion concentrations and have come up with complicated models to predict Tm. This formula is used in the IDT SciTools® programs to ensure your calculations are correct.” (See the formula in the above sidebar, Accurate Tm Calculation, and read a detailed explanation in the Technical report, Calculating Tm for oligonucleotide duplexes). The free online SciTools programs, such as the OligoAnalyzer® Tool, are available on the IDT website at www.idtdna.com/scitools.

Only free Mg2+ in solution reacts with DNA; therefore, it is also important to consider the presence of any compounds that bind mag¬nesium ions. For example, PCR reactions require deoxynucleoside triphosphates (dNTPs) in a mixture with short oligomer primers, probes, and longer nucleic acid targets. Magnesium ions bind to all of these components, thus decreasing the concentration of free Mg2+. As DNA synthesis proceeds during PCR, dNTPs are incorporated into the products and pyrophosphate is released. Pyrophosphate also binds Mg2+. Ideally, all of this should be considered when estimating the concentration of free Mg2+ in the hybridization solution.

Mismatches between hybridizing oligos have a profound effect on Tm. The effect depends both on sequence context and solution composition (while salt is the main factor considered, other additives, like urea, DMSO, and even SYBR® Green, can shift Tm). A single mismatch can cause Tm to vary between 1 and 18°C in PCR applications. The identity of the mismatch, its position in the sequence, and its context all impact the degree of the mismatches effect. A-A and A-C are among the least stable mismatch pairs, causing the largest Tm variation, as compared to G-T, one of the more stable mismatch pairs. The context of the mismatch (e.g., whether a G-T mismatch is adjacent to an A-T or G-C base pair) also affects Tm. “It really requires a calculator to get an accurate prediction of Tm for one’s specific sequence, and there is no simple rule of thumb you can use without running the calculation,” says Dr Owczarzy.

SNPs that underlie primer and probe hybridization sites, cause mismatches. "SNPs can affect PCR/qPCR experimental outcomes. There are a lot of SNPs out there, and their numbers are growing exponentially! Thus, we must design our PCR/qPCR assays intelligently, with SNPs in mind. It is important to check NCBI's dbSNP database (www.ncbi.nlm.nih.gov/snp) to determine whether SNPs have been identified within your amplicon. Then you can attempt to design your primer and probe locations around those SNPs, as the mismatches they create could likely affect your PCR results,” warns Dr Owczarzy. "However, by positioning them towards the 5' end of the probe or primer sequences, thus, away from the 3' end, these effects can be minimized or even prevented."

Designing oligonucleotide probes for mismatch discrimination. When mismatch discrimination is the goal of an experiment, shorter probes will provide better detection. However, use of short probes, which will have a low Tm and, thus, require a low annealing temperature, can also reduce specificity. So there is a trade-off. One way around this is to add stabilizing modifications such as locked nucleic acid residues to raise probe Tm. However, there are currently no calculators available for measuring how Tm is affected by most of the available modifications; therefore, the Tm needs to be determined empirically. If you can reach PCR annealing temperatures of 60°C, then you can use these shorter probes.

Choice of target strand. Sense and antisense strands are not equal with regard to mismatch discrimination. PCR/qPCR produces complementary strands; therefore, you can choose the strand to which the probe will bind. Thus, if you aim to detect a single base change in one strand, you can choose to design the primers and/or probe to detect the corresponding change of the complementary base in the other strand. The probe sequence used to bind to the sense strand will form a different type of mismatch than the sequence required to bind to the antisense strand. It may, therefore, be useful to calculate Tm for both scenarios. Again, the free, online IDT OligoAnalyzer Tool allows researchers to calculate Tm for mismatched sequences. You can also use the program to determine probe locations that enable better mismatch discrimination. 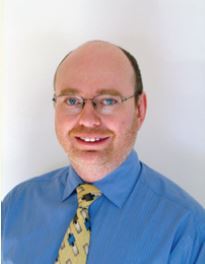 Dr Owczarzy came to IDT immediately after completing his PhD in chemistry at the University of Illinois, Chicago, IL, USA. He is currently a Senior Research Scientist and the “Thermodynamics Guru” at IDT. Dr Owczarzy’s research is focused on properties and functions of nucleic acids. His group has built complicated models and formulas that accurately predict Tm for nucleic acids. This work has helped numerous researchers worldwide to design oligonucleotides for molecular biology studies.